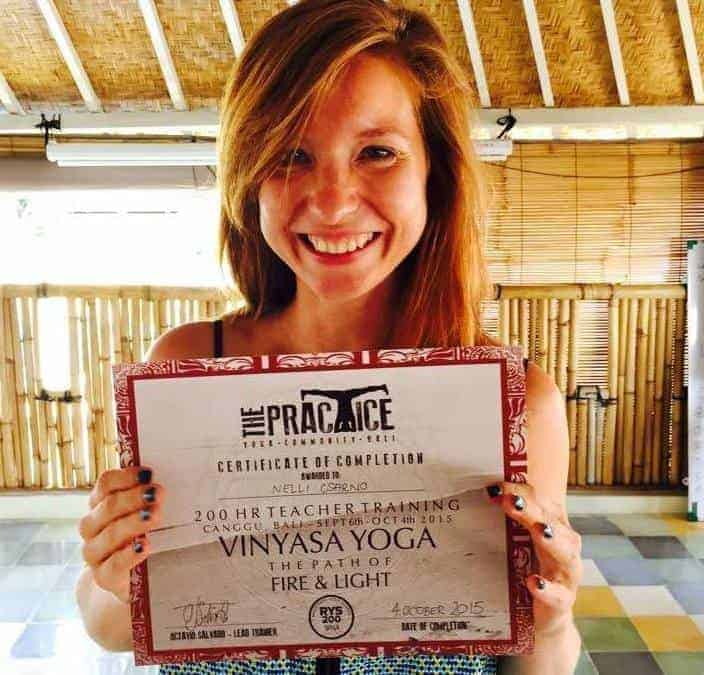 Navutu Dreams Resort & Wellness Retreat is proud to announce a new member to our team of yoga and wellness practitioners. Meet Nelli, Navutu Dreams‘ new yoga instructor. Nelli Csarno who hails from Budapest, Hungary will be sharing the practice of traditional Hatha and Vinyasa with emphasis on asanas which collectively constitute the physical aspect of yoga.The yoga practice she will be offering also includes mind-body centering, breathing techniques, relaxation and meditation.

She started practicing yoga 6 years ago. Initially, she did not know much about it. According to her, she just thought that yoga was a sort of gymnastics that it was merely about physical exercise. However, her perspective on yoga practice suddenly changed when she noticed positive results. After doing several yoga sessions, she experienced physical benefits which led to many other things. She became stronger, more confident and felt much better about herself. Her outlook on yoga has also changed, ”Yoga is not only an exercise, but rather, as a way of life”, she says.

Nelli’s passion for yoga compelled her to become a yoga instructor and to share her love for it with people who also want to achieve positive changes in their lives. She said she loved to see how it could have a transformative effect on other lives too.

Nelli had her Vinyasa Flow teacher training in Bali, Indonesia. The training she had was led by the highly skilled Octavio Salavado and her training consisted of three main parts: practice, study and teach. The first part made her practice mantras which have long been associated with cleansing techniques, meditation and asanas. The second part was about studying all the aspects of yoga from the basics to foundation, to processes and myths. The last part was about teaching. From there, she was able to practice what she had learned from the very beginning. She taught small groups to big groups.

Nelli and her fiancé decided to quit their jobs in Budapest to try something new and jump into unknown. According to her, her fiance used to work as a volunteer in Siem Reap and found Siem Reap as the happiest place to be in where he had the most freedom ever in his life. Siem Reap has got Nelli, either. When she first visited Angkor Wat, she was stunned by its ancient beauty. She also found herself practicing yoga at the temple during her stay in Siem Reap. Both of them have also decided to stay here as her fiance has got a job at AboutAsia, as a travel consultant, and her, pursuing her career as a yoga instructor.

If you are interested in joining one of Nelli’s yoga classes, please visit Navutu Yoga by Navutu Dreams.

Navutu Dreams is an award-winning resort and wellness retreat based in Siem Reap, Angkor.
All Posts »
PrevPreviousSiem Reap, A Rising Tourist Destination in Asia
NextRomantic Escapes to CambodiaNext