Was construction ever completed? Were the grounds part of an ancient ashram that predates the ancient Angkor civilization? Was the temple actually used to burn bodies? As the imposing and stunning state temple of Angkor King Rajendravarman dedicated around 960 A.D., 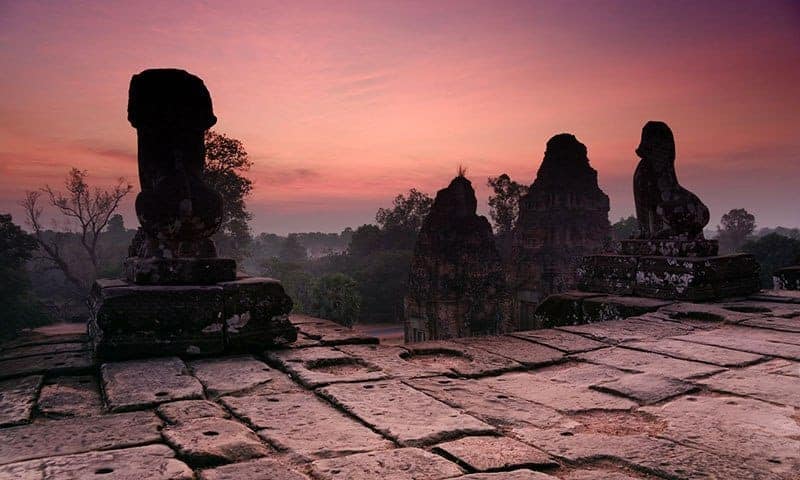 Was construction ever completed?

Were the grounds part of an ancient ashram that predates the ancient Angkor civilization?

Was the temple actually used to burn bodies?

As the imposing and stunning state temple of Angkor King Rajendravarman dedicated around 960 A.D., Pre Rup is a virtual temple-mountain made from a combination of materials ranging from brick to laterite and sandstone. A consistent favorite with visitors to the Angkor Archaeological Park, Pre Rup temple is big, beautiful and full of mysteries.

Getting to Pre Rup Temple

This colossal temple is impossible to miss. Located just south of the now-dried-up East Baray, Pre Rup is – like many Angkor temples – aligned precisely on the north-south axis along with East Mebon temple, which we will talk more about next month. The temple is located on what used to be an man-made island in the baray. Pre Rup was dedicated to the Hindu god Shiva and experts believe the temple was constructed on the site of a former shivaite monastery built in the previous century.

What to See at Pre Rup

Neighboring Hollywood’s favorite temple Ta Prohm, Pre Rup boasts an eastern entrance by way of a laterite causeway. Rather unfortunately, a modern road cuts across it. That means the temple itself is easier to access by car or tuk-tuk, but some of the effect of the ancient temple goes missing when hybrid cars are lined up adjacent to the looming temple tiers.

The temple’s lowest tier is symmetrically surrounded by 12 small shrines. Pre Rup’s grand final squared pyramid rises in three steep tiers measuring in at over a dozen metres tall to a 35-square metre platform at the top of the temple. At the top, five towers are arranged in a quincunx, or geometric pattern, with four towers forming a square and a fifth at its center.

There are a series of long galleries running parallel to each side of the temple. Architecture buffs will find this element of particular interest because these galleries are a distinctive feature of the 10th century Khmer architecture that was replaced by a continuous gallery, characteristic of Khmer architecture from the construction of Ta Keo temple onward.

There are three large towers looming over the interior of Pre Rup. One tower appears never to have been built – or to have been dismantled later; even today no one knows. Yet another mystery, Hindu gods carved in bas-relief stand regally at attention on either side of the central tower’s eastern door; its other doors are false doors.

One of the existing towers, the last one, has an inscription on the door frame that dates back to the reign of king Jayavarman VI. It is the only existing proof of his reign over ancient Angkor.

Pre Rup as an Ancient Crematorium?

Although this theory hasn’t been proven, there are a handful of historic indicators that Pre Rup temple may have served at a funeral site and crematorium for the Angkor civilization. It is common practice in Cambodia to hold funeral services at the temple, and Pre Rup means “turn the body” in Khmer.  The temple could have gotten its name from the ritual rotation of the deceased’s body and ashes throughout the funeral services. But again, no one really knows. This, too, goes down as another ancient Angkor mystery.

From Your Hotel to Pre Rup

When you should visit Pre Rup? If you’ve been considering a getaway to Siem Reap, you should do it soon. Several of the temple’s outermost towers are very close to collapsing. To counteract gravity’s pull on this gorgeous architectural mystery, the leaning towers have been propped up by a small army of wooden beam supports.

Are you already in town? Most Siem Reap hotels will pack you a meal to take on the go! Pre Rup’s external makeup of red brick and laterite give it an attractive red hue that really shines in the early morning sun and late afternoon light.  At Navutu Dreams Resort, a tuk-tuk driver will always be waiting to take you from your hotel room door to the mysterious Pre Rup, or any of the other incredible Angkor temples.

Navutu Dreams is an award-winning resort and wellness retreat based in Siem Reap, Angkor.
All Posts »
PrevPreviousPicnics & Boat Races at Cambodia’s Water Festival
NextSpirulina: Secrets of the Ancients RevealedNext