Yoga and meditation have transformed Maria’s life. Learning and practicing under the second and third generation disciples of Swami Rama, an influential yogic figure, her areas of study included yoga philosophy, theory, pranayama and physical asana, all keeping with 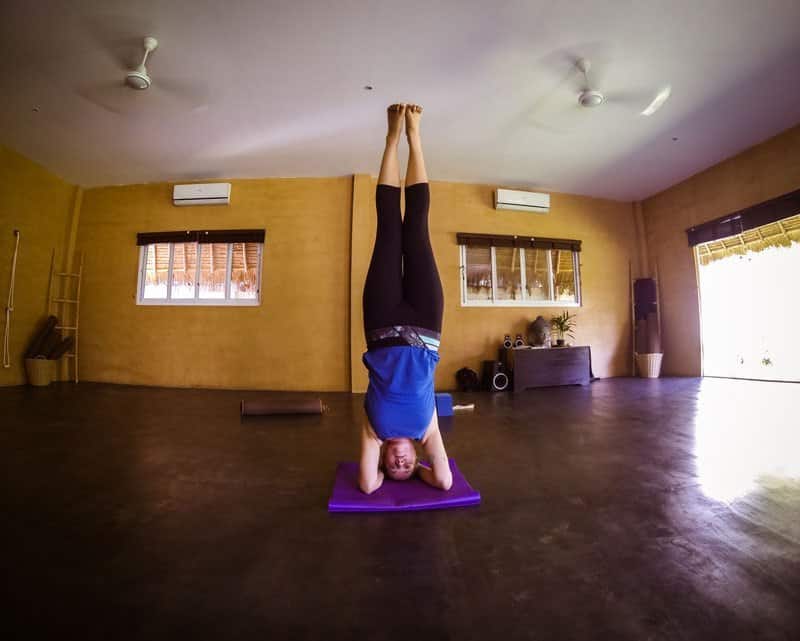 Yoga and meditation have transformed Maria’s life. Learning and practicing under the second and third generation disciples of Swami Rama, an influential yogic figure, her areas of study included yoga philosophy, theory, pranayama and physical asana, all keeping with the Indian tradition.

Maria’s yoga journey began right here in Siem Reap, where she attended a meditation retreat. She then decided to travel to Rishikesh in northern India, considered by Hindus to be a holy city and also known as the birthplace of yoga. There, she lived on-site at the foothills of the Himalayas, where the Ganges river flows down from the mountains.

Not only has Maria’s yoga education improved her outlook on life, it has also improved her physical health. Maria has experienced physical benefits she says she never could have anticipated. “I had a fracture in my spine from a previous injury, and in just 10 months I felt it correct itself. I felt my vertebrae popping back into place.” And she has X-rays to prove it.

Now sharing her knowledge at Navutu Dreams’ spacious yoga studio, Maria specializes in ashtanga yoga, which is a set sequence of postures that focus on breath and alignment.

You hold each posture for the same number of breaths – always five breaths – so if you practice it every day it becomes very meditative because it becomes muscle memory and habit. It’s quite dynamic as well; because you’re using your own breath, you do it at your own speed. That’s the beauty of it.

Because ashtanga yoga produces internal heat, it is also known to improve circulation and produce a detoxifying sweat. In addition, the body benefits tremendously from increased strength and flexibility.

Maria finishes each class with a short session of meditation, which she believes to be a necessary complement to yoga. She knows from experience that doing so after physically intense, energizing ashtanga yoga sequences results in a much deeper meditation. “If you move everything about and then let it settle, you can have a much more focused meditation.” For Maria, doing yoga without meditation leaves her feeling unbalanced, and she believes harnessing the power of meditation regularly can change one’s life.

All of the things I’m doing now, I couldn’t do if I didn’t meditate. It cultivates willpower, eliminates anxieties and any nervousness… It really focuses and clarifies the mind, so you make clearer decisions and fewer mistakes.

So why has Maria decided to continue to study and share her practice in Siem Reap? Other than the calming openness of the Cambodian people, her favorite thing about this city is it’s exciting energy.

It feels like an open city of opportunity. Because it’s rising relatively recently, it feels like it’s booming. Everyone feels excited by opportunities. Locals, expats, tourists and travelers… There seems to be an energy here that things are happening.

Maria’s ashtanga yoga classes at Navutu Dreams Resort & Wellness Retreat are designed to be experienced by anyone interested, including experts and beginners.

We’d love to hear from you and answer any question you might have. Tap the Whatsapp or Messenger Icon below and we’ll be right with you.