Water Festival in Cambodia Water Festival – “Bon Om Tuk” in Khmer – is a Cambodian festival celebrated annually in the month of November. This joyous occasion marks the bi-annual reversal of the flow of the Tonle Sap River. Every town in Cambodia holds 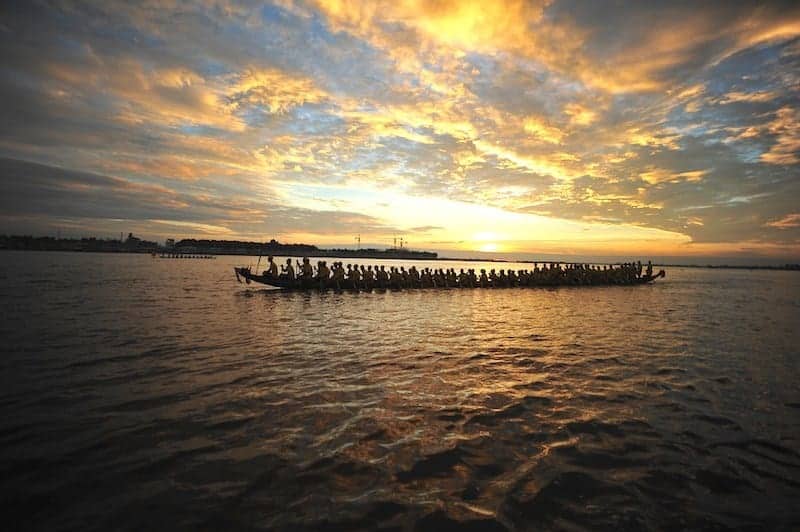 Water Festival – “Bon Om Tuk” in Khmer – is a Cambodian festival celebrated annually in the month of November. This joyous occasion marks the bi-annual reversal of the flow of the Tonle Sap River. Every town in Cambodia holds their own version of the festivities, but the biggest celebrations take place in Phnom Penh and Siem Reap.

For three days and nights, people pour into town from the provinces to celebrate with boat races, concerts, and lots of food. Cambodia’s Water Festival attracts up to a million people each year – mostly local. This year marks the first time Water Festival will be celebrated since 2010.

Origins of the Water Festival

The Water Festival traces its origins to the Cambodian army. Historically, the King held the water festival ceremony each year to choose the best men to accompany him to battle by sea. In Cambodia look out for statues commemorating Cambodian kings and various infamous sea battles.

Today’s Water Festivals commemorate these historical naval exercises and pay homage to the gods for providing Cambodia with enough rainwater in the Tonle Sap for a successful season of rice cultivation.

A month or so after Pchum Ben holidays, Water Festival is held each year in November. The exact dates vary according to the lunar calendar, so be sure to check a calendar of Cambodia’s National Holidays before your trip.

You should also be aware that some local businesses may close for up to three days during Water Festival, as everyone wants the chance to participate in the festivities. We would advise that you plan your holiday and accommodation well in advance, as this is a busy time of year in the Kingdom of Wonder. Locals who show up too late to book accommodation themselves will often camp in their cars or along the banks of the river.

What to Expect During Water Festival

The main spectacle during Water Festival is the boat races. Each town, province and pagoda builds its own boat for the races in Phnom Penh or Siem Reap. The boats are all boldly and beautifully painted, with the largest boats spanning up to 100 feet in length and requiring 80 rowers. At the bow of each boat, a beautifully costumed woman dances to the beat of the drums that keep rhythm for the rowers.

The first two days of the holiday consist of small-scale races between as few as two boats. On the third and final day, the festival culminates with one big race that every boat competes in. In addition to the boat race and daytime festivities, the Water Festival includes three separate ceremonies over the course of the three-day holiday:

Ak Ambok is a traditional rice dish consisting of rice fried in its husk, then pounded with a pestle. After pounding, the rice husks are removed and what is left of the rice is mixed with bananas and coconut. Ak Ambok is sold throughout the festival. Ask anyone and they can point you in the direction of the nearest vendor. Ak Ambok is a sweet and sticky rice treat. Don’t be scared to try some, as its flavors are very mild.

Cambodians gather at the pagoda just before midnight to eat Ak Ambok and salute the moon during a beautiful ceremony that you won’t see outside of Cambodia’s largest cities. In Cambodia a full moon is said to be a good omen for the upcoming harvest, so they gather during Water Festival to ask the moon for a fruitful rice harvest in the months to come.

The Loy Pratip parade begins at dusk, once the sun has set on the horizon. Dozens of intricately decorated boats float gently down the river, illuminated by thousands of fairy lights that denote the different state institutions, ministries and services that sponsor them.

Join Siem Reap in the festivities

Water Festival is one of Cambodia’s biggest holidays. One of few times each year that locals can take time off work to visit and celebrate with their families, this holiday is easily one of the most fun. Even if you don’t make it to the midnight moon festivities, you won’t be able to miss the carnival food, live music and riverside celebrations. Don’t be surprised if you get invited to join a family picnic along the water. Remember, this is one of few times each year that families reunite, and that alone is cause enough for celebration. Bring a blanket and a smile – but don’t worry, because if you forget yours, both will be in abundance.

Where to stay in Siem Reap

If you are looking for a place to stay in Siem Reap from which to celebrate the Cambodian Water Festival, seek no further. Navutu Dreams, one of the best hotels in Siem Reap offers you truly a relaxing and memorable stay in Angkor. Our resort hotel features 28 spacious guestrooms and suites, tropical gardens, three swimming pools, an on-site restaurant and a spa & wellness center. Booking directly with us automatically includes daily breakfast, a daily tuk tuk shuttle to Siem Reap town center, a spa experience treat and a US$10 food & beverage voucher.

For bookings, kindly contact our Reservations Team or book now.

Navutu Dreams is an award-winning resort and wellness retreat based in Siem Reap, Angkor.
All Posts »
PrevPreviousWhy Saltwater Pools Are Good For Your Health
NextMysteries of Pre Rup TempleNext