A few weeks ago, we introduced you to Kbal Spean temple: Kbal Spean is without a doubt the most elaborate of all the ancient Angkor temples, but the journey to reach the temple is more than half the fun. As the summer holidays come to a close, if you can make the trip 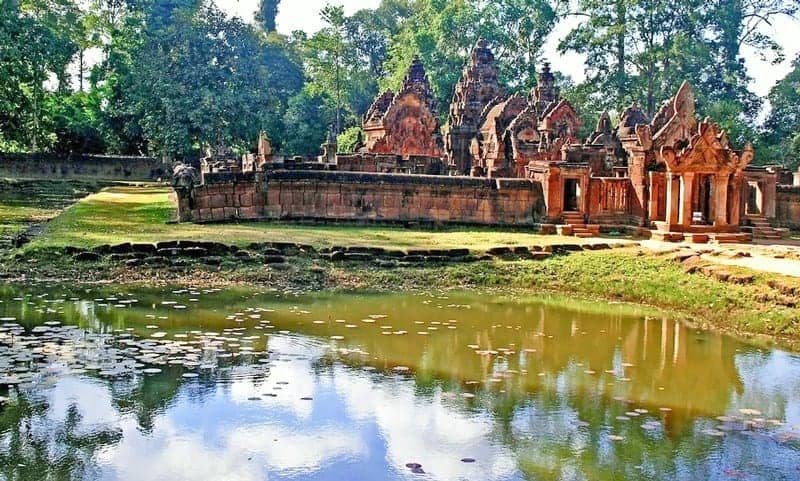 A few weeks ago, we introduced you to Kbal Spean temple: Kbal Spean is without a doubt the most elaborate of all the ancient Angkor temples, but the journey to reach the temple is more than half the fun. As the summer holidays come to a close, if you can make the trip to the Kingdom of Wonder later in the year you’ll be blessed with a generally cooler climate, and less tourist traffic…

If you think you’re up for it, you should include your trip to Kbal Spean with a visit to nearby Banteay Srey.

Banteay Srey, sometimes spelled Banteay Srei (Khmer: ប្រាសាទបន្ទាយស្រី) can be traced back to its opening in 967 AD.  The “Jewel of Khmer Art” is located near the hill of Phnom Dei, 25 kilometers – or 16 miles – northeast of the main Angkor Thom temple group, and dedicated to the Hindu god Shiva. An interesting side note, Banteay Srey is the only Angkor temple that wasn’t built for the king, but rather, for the gods.

Why you can’t miss Banteay Srey

This precious gem of a temple consists of a series of low slung walls surrounding peaked structures of deep red sandstone. Red sandstone has different properties to the light brown sandstone many of the Angkor temples are made of. Red sandstone’s characteristic malleability probably has a lot to do with the well-preserved relief carvings on Banteay Srey’s main buildings, depicting infamous scenes from ancient Hindu tales.

Most interesting about these reliefs isn’t their fantastic condition, but rather, their scale. The buildings depicted in these relief drawings are carved to scale – a very rare and complicated feat for the time of their construction.

Even more compelling, it is said that the reliefs on this temple are so delicate that they could only have been carved by the hand of a woman. It ‘s no wonder Banteay Srey means “Citadel of Women” in Khmer. The temple’s original name was Tribhuvanamahesvara, meaning “great lord of the threefold world” and was named after the central image of a Shaivite linga. At some point after its original dedication, the temple came under the control of the king and it was rededicated to Shiva.

Banteay Srey temple was only rediscovered in 1914. It was the subject of a highly celebrated case of art theft when André Malraux stole four devatas in 1923. Shortly after he stole the devatas he was apprehended and the figures were returned to their original location. Ironically, the French government that arrested him had removed a number of relief sculptures from Angkor Wat and other temples themselves. The theft garnered a lot of publicity, and actually increased visitors to the Angkor temples in the following years. The influx of visitors has increased every year since.

Getting to and from Banteay Srey

As we mentioned earlier, Kbal Spean closes at 3pm and is further from Siem Reap than Banteay Srey. The two temples are close enough together that they make the perfect afternoon outing when lumped together. You will need a valid Angkor pass to visit both sites. A new visitor and interpretation center opened at Banteay Srey in 2009 to help moderate the flow of visitors to the temple. You can pay for your pass – $20 – at the entrance to Banteay Srey, but head out to Kbal Spean first because Banteay Srey doesn’t close until 5pm.

For more information on the perfect day trip to the beautiful Kbal Spean and Banteay Srey temples, don’t hesitate to contact us. At our Luxury Resort in Siem Reap, we keep a small team of incredible tuk-tuk drivers on retainer for our lovely guests to utilize for 12 hours of every day. Pross and Kassit would be more than happy to take you on a day time tour of these incredible Angkor temples just off the beaten path.