The secret is already out on Angkor Wat – when visitors decide to visit Cambodia, sunrise at the ancient Angkor empire’s grandest temple is nothing short of obligatory. But even for those among us who don’t have a great interest in UNESCO World Heritage sites or the 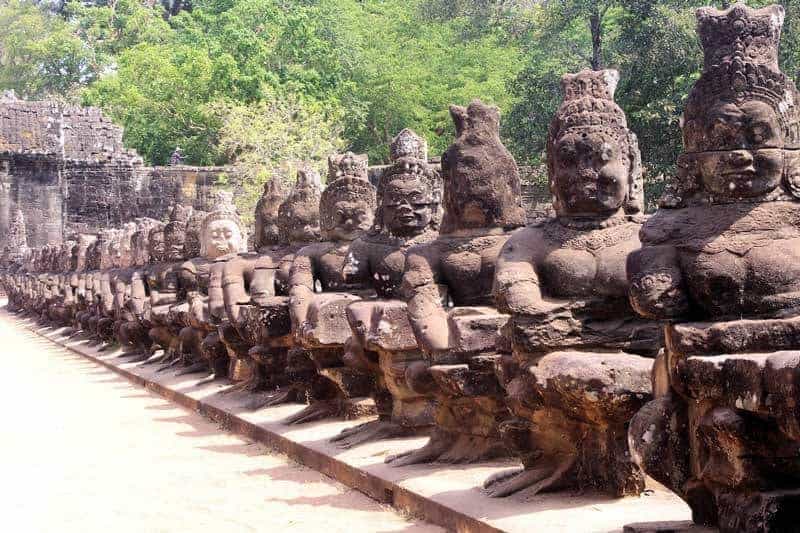 The secret is already out on Angkor Wat – when visitors decide to visit Cambodia, sunrise at the ancient Angkor empire’s grandest temple is nothing short of obligatory. But even for those among us who don’t have a great interest in UNESCO World Heritage sites or the Great Wonders of the ancient world, the Angkor temple complex is a celebrated attraction amongst gaming buffs, cinephiles and anyone with an eye for photography.

Released in 2001, the British-Japanese-German action adventure fantasy film, Lara Croft: Tomb Raider is based on the popular Tomb Raider video game series and features the character Lara Croft portrayed by Angelina Jolie and several other characters visiting Ta Prohm temple and the city of Angkor Thom during their trip to Cambodia to recover the first piece of the Triangle of Light. A fun fact: Ms. Jolie enjoyed herself in Cambodia so thoroughly that she adopted her first child Maddox after shooting scenes on location in Siem Reap.
[divider]

Everything lost is meant to be found. Don’t worry. -Lara Croft

The city of Angkor Thom is home to the infamous Bayon Temple, Baphoun, the ancient Royal Palace, the Terrace of the Elephants and Terrace of the Leper King. This epic 12th-century Buddhist city was built in perfectly geometric square, with the outer gates running directly north, south, east and west. At the peak of the Angkor empire historians estimate upwards of a million people lived in and around the city walls. Rightfully so, this area is vast – at nearly nine square kilometres – and difficult to cover in a single day.

The city of Angkor Thom was founded by King Jayavarman VII in the 12th century. It can be difficult to imagine the city as a bustling and regal ancient city, but at the peak of the Angkor Empire, the city of Angkor Thom and its temples and palaces was surrounded by a wall eight meters high and twelve kilometers long. Archaeologists agree that the palace was guarded by a 100 meter-wide moat that no longer exists but is said to have contained wild crocodiles.

Bayon Temple is one of the most visually arresting temples with over 100 mysterious faces adorning 37 remaining towers.  Some people say the faces were carved in the likeness of the king himself, and their placid expressions have earned them the nickname: Southeast Asia’s Mona Lisa.

The legend and the myth

One of the most intriguing aspects of the Angkor Archaeological Park is the organic mixture of Buddhist and Hindu traditions, and nowhere is this clearer than the South Gate. A single gate opens right in the middle of each wall surrounding the city of Angkor Thom. Each of these gates is flanked by 54 gods on the left and 54 demons on the right. The South Gate is the best preserved of the four, so it is your best bet for a great view of this epic Hindu battle played out in stone.

In the myth of the Churning of the Milk Ocean, the gods on the left pull on the snake head of Shesa while the demons on the right pull on the snake’s tail in the opposite direction. As a result of the back and forth motion – like the ultimate game of tug-of-war — the myth says that the ocean was ‘milked’, thus forming the earth and universe.

Angkor Thom isn’t just the setting for a Hollywood film. Just outside the city gates, Ta Prohm was likely chosen for its unique beauty as a result of rampant jungle overgrowth. Centuries old tree root systems have slowly wended their way around the temple remains so that they appear to be strangling the enormous building blocks that were hauled into place almost a thousand years ago. The overgrowth of the trees and vines in combination with the gradual decay of the temple walls makes for an eerie setting but more importantly, an incredibly breathtaking and photogenic sight.

Visiting the Angkor temple complex takes on a whole new meaning when you’re privy to a bit of the religious and cultural significance of each temple and tower. Ta Prohm, the South Gate, the city of Angkor Thom and everything within its walls are not only historically significant but now they have star quality in addition to picture-perfect views throughout.

Plan your Southeast Asia vacation in the Great Kingdom of Cambodia, and stay at the one of the best hotels in Siem Reap – Navutu Dreams Resort &  Wellness Retreat!